>> Next step? Get in touch HERE <<
See our services

What do we do?

What type of industrial buildings are suitable for our LED lighting system upgrades?

This can include (but not limited to):

We would like a FREE factory LED lighting survey & quote - what next?

1 Do you need better, more efficient lighting in your commercial or industrial building?

Your existing lighting could be wasting your business many thousands of pounds every year, be difficult to maintain, or even produce inadequate light for your working conditions.

Benefits for your business

We work across England & Wales

Contact Us Now To Arrange A Free Consultation & Quote!

Use one of the following methods to contact the Green Business Light team:

You Can E-mail Us:

Please complete and we will be back in touch as soon as possible.

* We aim to reply to all email enquiries within the hour

We Operate Across the UK

We Install & Commission Lighting for

Many businesses contact us about the installation of industrial LED lighting systems to replace existing 250/400W sodium & metal halide fittings with the primary intention of saving on energy and maintenance costs on their site. LED industrial lighting systems can certainly make exceptional savings but IT IS CRITICAL that LED light fittings are properly specified in factory and industrial buildings as these can present significant challenges.

Below are some key questions to be asked before deciding if an industrial LED lighting system solution is the right choice for factory and production buildings:

Larger industrial buildings (such as factories and production sites) typically have either low bay (a rectangular box housing at lower heights) or high bay light fittings (a domed housing at heights above 8 metres).

All of these HID light fixture types can usually be replaced by industrial LED light fittings but careful consideration must be given to the building conditions and the specification of the right light fixture.

Why is there a large variation in industrial LED light fitting costs?

The key thing to remember is that 'not all LEDs are equal' - at the moment the LED industrial lighting market is still relatively young - but growing rapidly as the technology becomes ever more efficient and the cost is reduced due to volume manufacturing etc. Every it year there are an increasing number of LED factory lighting suppliers.

The standardised costs of a typical HID (e.g. - sodium) industrial light is reflected by many years of market forces, regulation and their relatively simple constituent parts - namely:

However - a product from an industrial led lighting company can essentially be regarded as an electronic device comprised of a package of many individual electronic circuits & components (the failure of any one of these components will render the LED light inoperable).

When dealing with a LED factory lighting contractor you need to make decision between inexpensive industrial LED lights and a higher cost with an extended guarantee. We have heard of instances of poor quality, low-cost LED lights being stripped out of industrial buildings and replaced within 12 months

The light emitted from some some industrial LED fittings can appear to be a blue tinted cool light - there can be several different reasons for this:

Do industrial LED lights provide an even light 'spread'?

The high height of light fixture positioning in large building can present challenges for the industrial LED lighting contractor with regard to obtaining an even distribution of light on the working plane. This is because the individual LED chips in a light fixture emit light as a direct 'beam' and require lenses positioned in front of them to spread the light & simulate a uni-directional light source (such as a 400W HID bulb). An incorrect specification of lens 'beam angles' can result in light "pooling" and dark areas around the internal space

Properly specified LED factory lighting solutions should avoid these issues with the correct lenses etc to provide an even distribution of light.

Are LED's suitable for all industrial environments?

A LED factory lighting installation may not be straightforward - some industrial environments present challenges such as vibration from large machinery, caustic chemicals, extreme temperatures, and power supply fluctuations, making it difficult to find lighting solutions that are suitable.

Some processes produce large quantities of dirt and debris which result in large volumes of air particulates being present - this includes:

This particular set of conditions results in accumulation of deposits onto light fittings. For LED fixtures this can be a particular problem as the top side of the LED fitting is typically a large aluminium heat sink which needs to be kept clean to effectively remove heat from the chip. Dirt also accumulates on the lens of the fitting - a dirt depreciation factor may have to be worked into calculations for light levels

If frequent cleaning with water jets will required then LED factory lighting solutions with the correct IP rating need to be specified (as is the case with any other type of industrial light fitting). There are also corrosion proof and explosive proof LED lights available for certain situations.

An industrial LED lighting supplier who understands your requirements for the specification of the correctly rated light fittings is absolutely crucial.

Are LED lights suitable for industrial environments with extreme temperatures?

Not every industrial led lighting company will have low bay or high bay LED lights that have been specifically designed for these types of conditions - specialist LED fittings will be necessary in these types of case.

How efficient are industrial LED lights?

It is impossible not to look at efficiency without examining the headline figures of lumens per watt output (also known as efficacy) for LEDs but this isn't the full story. The efficacy of a factory LED lighting fixture is a cumulative efficiency of its LEDs, heat sink, driver and optics. The system level efficacy of a LED luminaire is typically 25-30% less than the LED component due to losses from thermal, electrical and optical efficiency.For example, the LED component efficacy may be in the range of 140 – 150 lumens per watt, but after efficiency losses, the total system efficacy may be closer to range of 100 lumens per watt

A general rule of thumb is that - to preserve existing light (lux) levels - energy consumption can be, at most, approximately halved from installation of new energy saving industrial lighting fixtures alone. Any further savings have to be made by control systems which adjust the light fixture power output for presence detection or existing daylight levels

A key aspect large open spaces of industrial buildings necessitate a much more evenly spread light with constant levels everywhere - a building such as a warehouse has the opportunity to adjust lighting levels in micro-zones (aisles, racking etc - as well as presence detection in these zones) which allows the very large savings to be made

Can industrial LED lighting be used with daylight control systems?

If there is sufficient access to daylight (via roof sky-panels etc.) - industrial LED lighting can be programmed to automatically adjust their light output levels in response to daylight entering the building during the different hours of the day (and times of the year) - this can provide additional savings which would not otherwise have been available with the older lighting system

Do LEDs have lower maintenance costs in industrial buildings?

Due to on-site machinery & equipment, hazardous processes or extreme heights industrial light fittings can be difficult to access for routine maintenance (e.g. - cleaning, lamp changes etc.) Industrial LED lighting fittings have a very long lifetime in comparison to other lighting options - 50000 hours plus is typical - which decreases the maintenance costs and other indirect costs such as necessary downtime etc.

Are there situations where LEDs have further advantages?

There are some industrial and manufacturing environments where LEDs enjoy key operational benefits over other energy efficient lighting choices (such as T5 fluorescent tubes, induction lamp etc.) - some of these are listed below:

Getting a trial of LED lights?

If you are getting a trial or demonstration of new LED light fixtures from e.g. - an industrial LED lighting installer or electrical contractor - please note the following carefully:

Green Business Light provides a complete LED lighting supply and installation service for all types of industrial & factory buildings - contact us now to arrange a lighting survey and quotation... 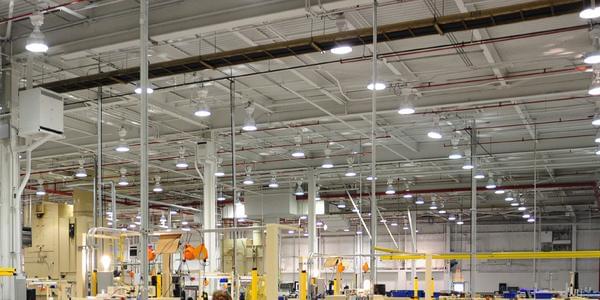